It’s snowed here for the last couple of days. That’s pretty unusual. I’ve commuted on the Pug, gone the long ways, and played in the parks. Great fun. Anyway, that’s why I haven’t written anything about the weekend yet!

Sometimes the weekend flies by. Straight after work on Thursday I was off to the airport. A couple of hours later I landed in Edinburgh and met Jim and Angus. Jim drove us up to Aviemore where we found the Old Bridge Inn was shut so, after playing with a big bag of Mountain Equipment gloves, we headed to bed. 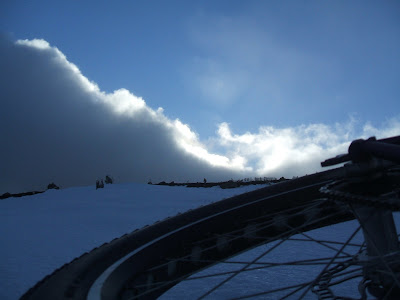 Friday morning I rebuilt the bike and loaded it up as close to the set-up I’m intending to use in Alaska as possible. The plan for the weekend was for me to get some decent practice using the fully loaded bike and fine-tune a few items of kit. Angus was along to film me for the Trad Film competition.

We headed up to Cairngorm Ski Centre- the highest area around. Heather, the Ranger on duty gave us some suggestions of where to find the best snow, without annoying too many skiers and Snowboarders. The winds were pretty strong (80mph?) and the push up the hill was pretty strenuous, but just as I’d anticipated. It was pretty much a white-out so the filming will hopefully make me look tough. Although it’s more likely it was just un-usable… After several hours of pushing, only broken up by small sections I could ride, we ran out of time. The descent was great though! I even overtook a couple of snowboarders!

We then shot down the hill to meet Carl, the mountain bike guide at Glenmore Lodge. He had a play on the Pug and gave us some good tips on places to ride, as well as planting the seed for a new adventure… We also tried to get in touch with the local dog sled centre as one of them is heading out to run the Iditarod (dog race) next year, so would have been interesting to talk to. Unfortunately they weren’t answering their phone. 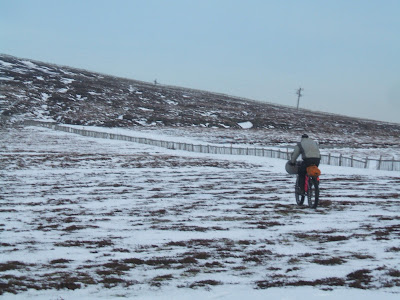 Saturday we drove to the Lecht ski area and headed up to the plateau at the top of the hill. Compared to the previous day it was quite a bit brighter but the snow was deeper. I did a load of loops and played about in the drifts and trying to wall ride the frozen banks. Loads of fun. After a late lunch Angus interviewed me a bit then we sorted ourselves out and headed out. We parked in a forestry car park, ignoring the “no over night parking” sign and all the mobile homes, grabbed our bikes and headed out in to the dark. After a couple of miles ride in to the forest we headed off in to the brush in the vague direction of a secret bothy spot. It took us a while to find but when we finally spotted it we were pleasantly surprised. Once inside we did a little more filming, enjoyed a couple of beers and played some Pass the Pigs (an Alpkit favourite). Jim and Angus slept inside but I slept outside in my new hot pink prototype bivy bag and –40 rated Devkit sleeping bag. Both preformed exactly as predicted: The sleeping bag was far too warm and the bivy bag was not breathable enough! The sleeping bag system is awesome. Basically, there is an inner down bag and an outer synthetic layer which means the bag will be a lot warmer when it’s damp and the dew-point will be outside the down so it should stay dryer anyway. The next bivy bag is going to be made out of Event fabric so the breathability will be sorted. It’s good and light and the ideal size to fit around the sleeping bag allowing the down to fully loft but not to big in order to minimise weight. 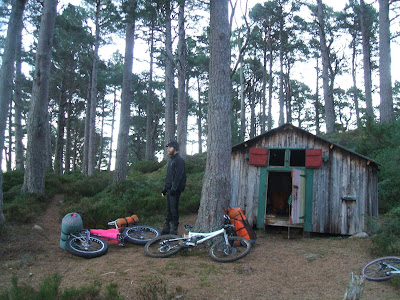 In the morning we woke up and immediately realised just how obvious the bothy was… Oh well. We rode back to the van and headed up to Cairngorm again. We did a different loop this time, the ground was really icy and it was really windy again but it was a fun ride. After that there was just time pack up and head of to our respective homes. I got back at about 11:30.

From my point of view the weekend was a great success: everything worked as expected, I felt fine carting the bike around, and, well, it was fun! Hopefully the film turns out well! 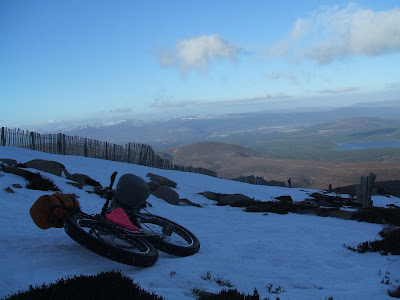 As an aside: Since I’ve had it the Pug as been a big conversation piece. It gets weird looks and everyone is fascinated by it. The funny thing this weekend was that a lot of people “got it”, I guess, the weather up in Aviemore is sufficient for it to make a practical bike, while down here it only comes in to it’s own a couple of days a year (including today…). On that note I’m going to get it built up again and go and play in the snow!
Posted by Shaggy at 19:36