Just back from holiday.

Drowning in emails, but nice and relaxed. My plan for this summer had, originally, been to head out to the ‘States for the Colorado Trail race. Unfortunately, things stacked up against me and I made the hard decision to stay at home. Sounds like I missed a tough year. My next plan was to ride the Bearded Man Black Mountain 3 Day. Then the event got cancelled...

So what have I been up to? First up was 24/12. As I was planning to be flying to Colorado the following day I hadn’t sorted out a team as the plan was simply to go down for a spin and to hang out. After talking to Griff at Trek I ended up in a pair, filling in for the broken Travis Brown. Spot on. However on turning up at the race site, as seems to be a pattern this summer that, had also fallen through. Thankfully after a chat with KB I found a space on the Bontrager and friends team. As the only “proper racer” I was nominated to ride the first lap. Unlike most 24 hour races 24/12 doesn’t have a Le Mans start, personally I really like starting on the bike as it seems less stressful for me. I was amazed just how quickly some people started, it was immediately clear that they had no idea about pacing themselves as and I re-passed 90% of them in the first mile. I settled in to a nice rhythm and soon found myself riding with solo racers Rich Rothwell and Big Rob Dean. I had a great lap chatting with them and playing on the course. Back at the camp the Trek pit was super sorted and the atmosphere was great chilling out by the BBQ. After a chat with Rory from Exposure I blagged a prototype Six Pack, their new one thousand eight hundred lumen light, for my night lap. Super bright lights are funny- they aren’t really necessary. When I started racing solo I was fine with 5 Watt halogens. The thing is for night racing there is an arms race going on. If the guy behind you has a better light it makes it tough for you to stay in front. Setting of in to the night I was soon reminded of this, riders would literally stop a hundred meters in front of me to let me pass. Needless to say, despite the pouring rain, my night lap was brill
iant fun. I finished totally buzzing and needed a few glasses of Cointreau and lime (classy Jez...) before I was ready for bed. Sometimes I miss racing but this 24/12 was the best ever for me. Great course, great people, great food.

Next on the list was a rather impromptu silly ride. I had a bash at riding the West Highland Way double. Idle hands had me scratching around for something to do, after a very helpful chat with Rob Lee I set a date, 10 days later, to have a bash. There’s been a lot of chat about this challenge but it remains un-ridden. My legs were feeling good and now seemed as good a time as any. I had a bit of a mad panic getting my bike sorted and collecting kit but everything came together. The plan was to leave Milngavie early evening so I would get the harder direction out of the way first, but also the most technical sections I would be ridden in the light. I set of just after 6pm travelling very light. I made very quick progress through the early miles. Even, the notoriously tough, climb over Conic hill was out of the way quickly and I loved the descent- the Top Fuel got me out of trouble just as quickly as it got in to it! 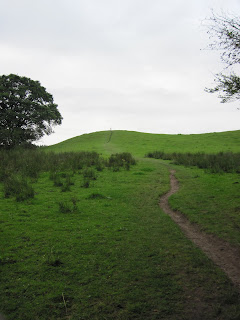 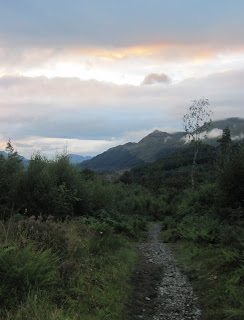 By the time I got to Ptarmigan lodge I had to fire up the Six Pack but I was still feeling strong. By now it was drizzling pretty heavily, so I stopped briefly to put on some waterproof trousers and my ace new Gore Alp-X jacket. The feared portage section along Loch Lomond side was better that I had feared but by the time I reached Rob Roys cave the weather was decidedly bad. The trail was very slimy under foot (or tyre?) and it was really slowing my progress. And that’s not to mention the stiff headwind. At this stage I had a rare thought about my safety. I was carrying some extra warm clothing and a survival bag but to keep it light I didn’t have a sleeping bag or bivy. As I rode past a candle lit bothy I almost stopped rather than risk the exposure on the desolate later sections. I reassured myself that I was still feeling fresh so opted to push on. Push being the operative word. Frustratingly the surface was really limiting the amount I could ride. The trail undulates quite a lot and I’m sure in better weather I’m sure I could have made much better progress. As it stood, it just seemed to be ruining my legs. At about 3 am I passed some guys drunk at a camp fire we looked at each other with confusion but I carried on, resisting the temptation to stop for a beer.

On the descent towards Kingshouse (I think, it’s a bit of a blur...) things took a turn for the worse. Visibility had been low for quite a while but as the trail pointed down cloud seemed to lift. As I railed a fast left hander a sheep threw itself in front of my bike. I couldn’t quite believe it was happening, for some time I had been shouting or singing to scatter sheep, but this one actually turned around and ran in to my path. I glanced of its hind legs and cart wheeled over the bars throwing my bike of the trail. My bike and I landed in the predictable piles of pointy rocks, the sheep hardly broke step. By the time I had picked myself up I was already engulfed in a swarm of midges. The bike was in a pretty bad way; ripped sidewall, bent rotor, front mech spun around the seat tube, stem at a rakish angle and a smashed end to my carbon bars... I straightened out as much as I could and popped an anchovy in the front tyre all the time not to inhale the midges. The whole thing seemed ridiculous. Thankfully it didn’t take me too long to get going again and by now the sun was coming up, which is always a nice psychological boost. Another puncture slowed me down a little but I was really enjoying my own company and having fun on the trail. The Devils Staircase was slow going but the following downhill was very entertaining, gusts of wind came from nowhere as I tried to make it down fast and in one piece.

Unfortunately, by now the weather was really closing in again and this time my legs were really starting to suffer. As I climbed out of Kinlochleven I got the sinking feeling that I wouldn't be getting back here today. The ride in to Fort William was really fun despite it all but I spent the whole time soul searching. Was I giving in too easily? I came to the conclusion that it was going to be dangerous to drag myself back out in to the hills in this condition, in this weather. Packing early is always a hard decision, but as I sit here typing, nearly 3 weeks later, my knees are being iced as I try to get them back in to working order. I know it was the right decision.

A lot of forum chat has been really negative about this route but I enjoyed it. While I'm sure it isn't the best point to point (to point) route Scotland has to offer, it is a great yard stick. I'd like to have another crack at the double at some point. Watch this space.
Posted by Shaggy at 13:47

I love reading about the fun stuff you do bro! Love Kirsty

Kamikazi sheep to contend with also... Riding support on a WHW double effort later today. Will def remember the shouting and singing to hopefully ward them off!