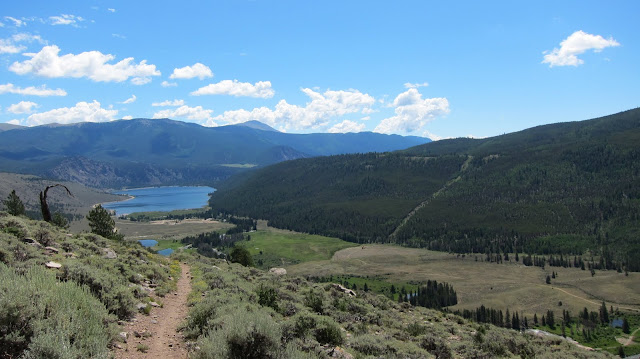 Since my failure at the ITI I've pretty much put this blog out of my mind. It just reminded me of the crash. I was hugely disappointed to drop out so early. However, the way I look at, if you are going to seek out the hardest events out there, the chance of failure is pretty high.

"It is better to take a chance in life to win a victory or suffer defeat even though scarred by failure... than to live in the shadow of life as some do never knowing a victory or defeat because they have not the guts to try either!"

The shoulder healed up well. The head was a bit harder to fix. I knew I had to get back on the horse- do a Maverick. I'd been thinking about the Colorado Trail Race for a while, in fact I planned to race it last year but couldn't get the cash together. To me it's the toughest mountain bike race out there. A bold claim, I know, but the unsupported nature, the altitude and, most importantly, the technical nature of the trails, does it for me. It wasn't just going to be the riding that was the problem. Alaska had been an expensive trip (almost 2 months pay) so Colorado was always going to be a struggle, especially as I knew I would have to pay for extra holiday time. I started living like a monk. A monk who rides a bike a lot, drinks, and doesn't believe in god. Then I started selling bikes. I parted with quite a lot of stuff. Some of which I would have really have liked to keep. That said my mate Alec bought enough stuff to pay for my flights so certainly worthwhile. Suffice to say I made it there. I loved it. Certainly the best bike event I've done. I haven't even finished sorting the photos yet, let alone started the write up. It looks like it will be in Singletrack mag. I hope it'll be worth the wait.
Posted by Shaggy at 22:20