Another enthralling episode of “Stuff that I did on holiday”.

After the eventful trip up the West Highland Way pulling the plug left me muddy and cold stranded in Fort William. Mel was on her way up from Dr Jon’s house in Glasgow but knowing I had a few hours to kill I headed for Off-Beat Bikes where the mechanics kindly let me stash my bike while I went in search of coffee and fried food. Several large espressos later I opted to lean my bike up in the corner of a car park and have a sleep up against it. Despite hard ground, no sleeping bag or bivy and the rushing wind I slept like a log for a hour, until I got too cold. Just as well I wasn’t up a hill... Shortly afterwards Mel found me riding round the car park warming up. We headed for the closest campsite and, after a quick shower, I spent the next 24hrs alternating sleeping and eating. 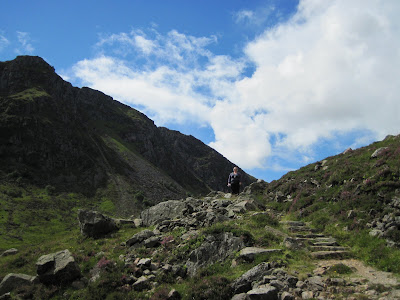 At this point I should explain that we had borrowed my dad’s new camper van. The plan was to have 2 weeks touring Scotland. See a few sights, climb a few hills, eat some good food. That went pretty well for the first week. From Fort William we visited Pitlochry, Arbroath and The Trossachs before heading back to see Jon and Trina. Even a week later my knees weren’t quite right, so we cut the touring short and headed home to get some rest. A couple of days urgent DIY that I have been putting off for 2 years, I settled down to some bike maintenance. First up was the 69er singlespeed that I was planning on using for SSUK the coming weekend. The Hive bb was dead, and it was going to be a push to get it sorted in time. What to do? Then I looked at the Top Fuel, my current ‘Bike du jour’. Chain, cassette and cables are dead so need to come off. My mind ticked over... Top Fuel single speed here we come! A couple of hours later I suddenly had a badass looking race ready single speed. Just over 20lb with sensible tyres and a bottle cage. Nice. The first spin was to be as expected: It rides pretty much the same as it does with gears. In other words, quick! This is when the issue of my knees hit home. They still weren’t right. I cut the ride short and went home to grab some Ibuprofen and ice. I crossed my fingers and rested my legs.

SSUK this year was being hosted by SSEC and national 24hr champ Matt Page and my old friend, and former 69er rider, Andy “Gooner” Gowan. So as soon as they announced it I knew I couldn’t miss it. Friday saw the campsite fill with faces old and new. Unfortunately the dates clashed with the Brighton Big Dog, organised by Morvelo and the other members of the Brighton crew so there were a few notable absences, which was a shame. Friday night was a good laugh, as we’d become accustomed. Saturday was race day and after a short ride out to the trails at Cwm Rhaeadr the race got under way with the traditional Le Mans start. Straight away I knew I was in trouble. Before I was even on my bike I knew I was in trouble, my knee was sore already. I rode the first section in the front group of three but at the first really steep climb I knew I had to back off. My body felt fine, with the exception of my knees which were extremely painful- to the extent it felt like I couldn’t transfer any substantial power through them. From that stage I took it easy and tried to enjoy the ride, but thats easier said than done if you were looking forward to a race. Thankfully the course was excellent and I loved the long fast descent, especially where the luxury of rear wheel suspension had me nipping past riders. On the second lap I attempting a hot line, through the inside of a rocky switchback, to pass some slower riders. Although the move briefly worked it put a gash in my rear tyre. As I attempted to fix it Dave Optional-Chops saved the day with a loan of his pimpy Superfly. I ended up riding the last two laps on it, which was a really nice illustration of how the two opposing bikes preformed differently and yet the same... Eventual winners were Johnny Pugh, who seemed to be in a bad mood all day, and Mel Spratt, who seemed to really enjoy herself. Un-surprisingly Mel got loudest cheer and won a sweet custom Exposure light. I finished about 10th but scooped a wicked I-Spy Bikes book for having the Pimpyest bike.

Saturday night saw inappropriate recovery drinks, epic partying, great tunes, lots of dancing, a hilarious tug-of-war competition and the dangerous Mini-bike racing. After that it’s a bit of a blur... Another great year, roll on SSUK 2011!

what did you think of arbroath then.

that is my home town , where i cut my teeth on the bike !

live near stonehaven now - arbroaths gone to the wall a bit now the a92 dual carridgeway is in place !