The holiday period was a nice break from work. I kicked it of with a Christmas eve dinner with my parents so I could free up Christmas day… I had a bit of a sleep in on Christmas day followed by a big breakfast. About 1pm I headed out on my cheapo touring bike- designation Glasgow. The trip was fairly uneventful but the sun was shining and the traffic volume was really low so the ride was quite pleasant. Unfortunately though, there was a reasonable headwind and I struggled to find water so the first day I didn’t make as much progress as I had intended. At about 140 miles, somewhere near Warrington, I snuck of the road and rolled out my new Alpkit Hunka and Pipedream 800 in a nice sheltered hole. I later described the location to Dr Jon, “Just off a main road, sheltered behind some trees. It was a narrow trench, about a foot deep and perhaps 7” long… so, err, like a shallow grave”. I’m sure it was nothing so ominous really! I got a good 4 hours sleep. It was more than I had previously intended, but I hadn’t drunk anything for several hours so it seemed sensible to only get moving when shops would be starting to open. The roads through Warrington and Preston were fairly cut up, but I made good time. Breakfast was a very fatty Subway and a Pepsi. One amusing incident was watching a fun run going in the opposite direction. The runner off the front was in an Elvis Catsuit. Good lad. By the time I reached Kendal it was starting to get dark and cold. The Climb over Shap Fell (?) was pretty tough so I tried to get something to eat in Penrith. All the pubs had stopped serving so I settled for a very poor steak and chips in a Indian restaurant. Serves me right I suppose. I tried to get my own back by abusing their bottomless coffee. About 7o'clock I hit the road again and headed further north. I got a bit lost around Carlisle before I realised I was navigation with a nine year old map and the roads had changed. Oops. 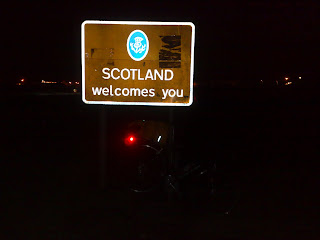 By the time I cleared the Scottish border it was really icy and the roads were really pretty treacherous. I opted to stop at about 01:30 when my water bottles froze solid. I had a surprisingly comfortable nights sleep considering I was on the edge of my bags temperature rating, and was sharing it with two bottles of ice. 3 hours later, I was up and in to every piece of clothing I had with me. A coke, an energy gel and a Mule bar made up breakfast as I hurriedly stowed my kit. The remaining 50/60 miles were a lot hillier than I had envisaged and the road was still pretty icy so I made slow progress. However the miles slowly passed and I was treated to a great sunrise and plentiful wildlife. I met Dr Jon in the outskirts of Glasgow just as Mel’s flight landed in a different suburb. 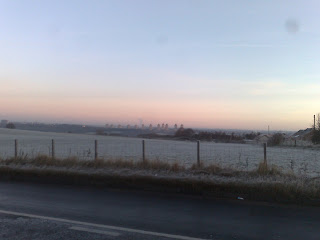 I certainly could have done the route a lot quicker but the journey was more an excuse to test some kit, practice getting in and out of my bivy, eating lots, sleep deprivation etc. All-in it was pretty good way to spend 400 miles, even if it did confuse many of my friends and make for a rather surreal Christmas! I spent the New Year’s Eve in Ardnamurchin with friends. It was a good chance to get some relaxing in.
I read Ghost Trails- it got me excited, very enjoyable. I stripped my MSR Whisperlite so it should be as good as new.
I tested my new Alpkit Devkit prototype jacket on the beach.
I started to break in my new Scarpa boots.
I got some running in.
Posted by Shaggy at 21:09

Can I suggest a curry the next time your in an Indian Restaurant and want/need some food ;0)

I know! I never seem to get enough calories out of rice though. I did have a load of bhajis!

Nice one John, was wondering if you'd made the trip up by bike.

Just found your blog. Thanks for buying the book and posting a picture! If it's all right with you I may link to this on my blog.

Looking forward to the race this year. I'm every bit as nervous as I was last year. I don't think it ever gets any less daunting. But it's an amazing journey. I look forward to meeting you in Knik, perhaps before. How soon before March 1 will you be in Anchorage?

Good luck in your training!