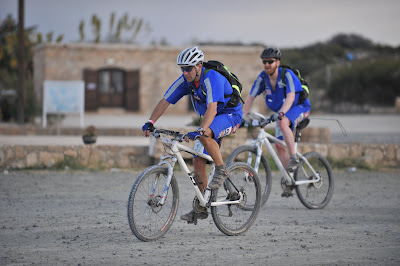 Sorry for the gap in postings but it’s that time of year and between Christmas parties, work and trying to get some riding and running in I’ve been pretty busy.

The World team Challenge was a great event. I really liked Cyprus and it was definitely the best venue I’ve been to for one of these events. The journey build up is always a little tense, but this time at least the journey went smoothly. I got picked up at 3am and made for Heathrow, terminal 5. We effortlessly cruised through security, seeing no evidence of the chaos the media had led us to believe in. The journey was long but pretty un-eventful, so by the time we got to the hotel and grabbed dinner it everyone was pretty much ready for bed.

Thursday was spent preparing for the event- assembly bikes, a quick ride and then a ride to loosen up the legs and stocking up on supplies. By the evening we had time to have a swim and a bit of relaxing before the event briefings started. 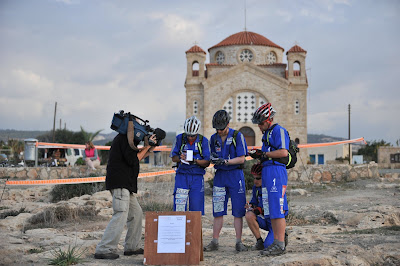 Friday morning saw us start the first stage high on Mount Olympus the area was lovely and the weather was beautiful and sunny but with snow hiding in the shade. Challenger stages are never easy to explain (that’s part of the attraction of the event!) but the general format of this one was a four hour ride and run with twelve “challenges”. The challenges could be done in any order but you had the added complication of having to collect points to allow you time in each of 3 zones. We set off at a casual pace but kept going steadily, slowly knocking off one challenge at a time. Some were puzzles, one was hill sprints, one was carrying people, good performances gave you time bonuses. In the end we managed eleven of the twelve and comfortably won the stage.

The next stage was back at the hotel at night. We had to solve puzzles and run around to get materials in order to construct canoes. Again we had a solid performance, winning the stage. Finishing quickly would have allowed most teams to go to bed early but instead we went through course notes and strategy for the stage the following morning. Unfortunately this didn’t pay off.


The third stage saw us split into two pairs. The two pairs had to communicate using flags and then run to appropriate checkpoints to “buy” goods and then run somewhere else to sell them. Unfortunately, despite a generally good performance one silly error landed us with a huge penalty (excessively large in our view). This knocked us down to sixteenth in this stage, which placed us third going in to the final stage. For the final stage the ranking equated to a penalty; nothing for first, five minutes for us, and increasing as you move down the table. You have to sit out the penalty towards the end of the stage. I’d already seen the map of the final stage so knew it was going to be tight. 1km run then 25km downhill on the mountain bikes followed by a 5km run and punctuated by 4 “Brain Cells” where you had to answer a puzzle or sit out a further penalty. We got off to a good start, leading the field to the first Brain Cell. Then we got the puzzle wrong. As we sat out our five-minute penalty several teams passed us. So off we chased. The second question we got correct and put us back in the lead on the ground. We chain-ganged along the coast slowly extending our lead, right up to the third Brain Cell. Where we, once again, got the question wrong and we lost the lead. Now we knew that it was going to be super close. We still had to sit out our five-minute penalty (for qualifying third) and the leaders, Sanlam Investment Management from South Africa, were in front of us with no penalty. By the transition into the run we had made up a fair bit of time and we came almost together. We sat out our penalty as they made almost three minutes on us- quite a margin to make over 5km! Those few minutes were tense. We set off at a quick pace, and as the weakest runner I opted to get a tow from Pete. Team before pride. There wasn’t much talking going on- just time splits when we caught a sight of them. Slowly we got closer. Then is a rocky-as-hell section we caught them. Showing their sportsmanship they let us past without a fuss and wished us luck. We then hit tarmac and the pace quickened. There was a long straight, but no one looked back there was no point- we couldn’t go any quicker. We got to the hotel with them out of sight and headed to the final Brain Cell. We knew this one was an observation question. We had to put a series of photos from the course in the correct order. It was a tough call, so we made an informed guess. Wrong. The South Africans came in about 2 minutes down. The now knew if they got the question right they would beat us and win the event. If they got it wrong, they couldn’t make up the time. So they deliberated over it. All we could do is wait. But they got it wrong. Then the US Air Force came in, and again got the question wrong. As we counted down our penalty we knew we had it in the bag! 4 of us ran around the harbour while Chewy had to swim across. We helped him out and ran over the finish line together to claim the title for another year! 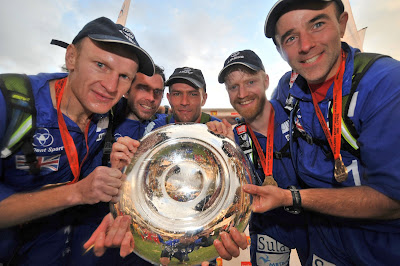