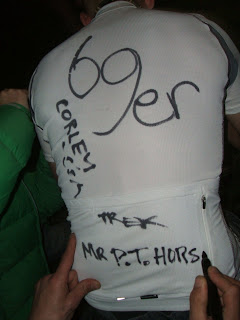 This seems like a long time ago but it really needs writing about...

24/12 is a Bontrager sponsored 12 and 24 hr race. Due to the 69er Collective's tie in with KB we were all keen to get there and do our bit. Matt and Trippy raced solo 24 while Goon, Woody and I enlisted Phil The Horse to race in the Open 24.

It's been quite a few years since I've raced at Newnham Park but the trails there are awesome and knowing Martyn and Keith had been hard at work I was sure the event was going to be great.

Friday night we arrived at about 7ish to find Trippy "partied out" and Goon drinking a very large Whisky from a plastic cup. It was going to be another one of those nights... We relaxed in to it.

Race day dawned, but all was not well. I couldn't hold any food down. Then I remembered the sandwich I had had the previous night. I remember thinking it was a bit warm, but saying to myself "it'll be ok...". Oops. I stepped down from taking the first lap. Woody put in a scorcher and then I went out. The course was great, all very rideable on a single speed but a little flat in places for it to be really fast for us. As per Martyn's normal courses there was a lot of singletrack- more than enough to make you want to go out again. I settled in to a nice rhythm but my body wasnt happy, the lack of food was making me feel week already. I got round in a respectable time, despite almost going over the bars in the river crossing. The others went out then we moved on to double laps, by then I was really green. I managed a single and then had to make a trip to the toilet and then bed. Very early.

When I awoke it was Sunday morning. The others had soldiered on through the night and we were sitting pretty in 2nd place. I put on my fresh lycra and got on my bike. I still hadn't managed to eat much, but by now I was holding down fluids so I hoped this was enough. I really wanted to get out there and give the others a , much deserved, rest. I forget how many I managed, but I squeezed a few singles in and hopefully this dragged up our average time. As the time ticked down it was clear that we were in a two horse race with the XC racer/Fisher 29er boys, with their ringers from the Colnago team. I headed out on our final lap knowing only a mechanical would let my catch Colnago Monty, but it wasnt to be. I did, however get the pleasure of a beer shower (towards the end of this video). We finished in a solid second place (and as the only singlespeeders), 20mins down on the winners but a whole two laps clear of third place.

Chris did really well for his first solo 24, getting 14 laps in. Unfortunately Matt had to retire early with ongoing issues from dehydrating himself really badly at the Spanish 24/12. Big shout to James "Nine toes" Leavesley, Iditarod rider last year and winner here.

Martyn puts on a great event. It really surprises me more people don't come to them. The courses are great fun and the atmosphere is always really good. Come on people make an effort, we'll be back!

Pic: Phil The Horse, in his Endura "ringer" kit. How pro?! As an aside, I think we first met in that there field about a decade ago at the BUSA mountain bike race. We bonded over Metal Christmas, next year he's being my best man. God help us.

I only just spotted that "Trek" looks more like "t rex"...